Most of the bowls are ceramic, and made by various artists in the Milwaukee area. However, they also accept wooden bowls and members of our club make and donate several bowls each year. The following pictures are bowls I have made for donation in 2021.

In an earlier post I showed part of the processing for these bowls. I have a few natural edge bowls and one other piece that have come from this wood.

I was able to core out a pair of natural edge bowls and kept the bark on them. These have actually been completed (sanded out and finished with wipe-on polyurethane) for some time as this is written in mid-August, 2020. The next few pictures are of this pair or bowls – the smaller one was cored out of the larger one.

There is another, smaller natural edge bowl. This bowl has a somewhat interesting history to me. I was passing part of the wood along to other club members and was sawing bowl rounds for him on my bandsaw. I let him select where to have the round sawn, and I felt he made a poor selection which resulted in a sizable piece of crotch wood left over. I took that piece and turned a smaller natural edge bowl from it with the following result:

Finally, one of the club members with whom I shared the wood made the following piece and insisted I share it with the person who donated the wood to the club. It is a small potpourri container with a pewter lid.

When I delivered the bowls to Wiliam T, he brought be more walnut logs to turn into bowls. I roughed out the logs into bowls and here are the results:

First, the failure – I tried to core a natural edge bowl set out of one of the log halves and had two failures – first, I cored too deeply. Next, I tried to make a smaller bowl out of what was left and turned through the side of the bowl. Here is a picture of the remnants.

Next, I was able to get one large natural edge bowl from one of the log halves. This still needs to be sanded out and sealed. It is between 12 and 13 inches at the longest dimension. There is a small piece of bark that I will glue back on before I sand out the bowl.

I have wanted to try chasing threads for some time and found a used set of thread chasing tools on line over the past winter. I’m not sure which brand they are – the tool is one piece of steel with a “female: end and a “male” end, that reverses in the handle. While using the tool a plastic screw that threads directly into the handle tightens against the steel.

A couple weeks ago I was able to try them out. I made a little elm jar and glued pieces of PVC pipe into place on the lid and into the neck of the jar. With beginners luck, I was able to achieve usable threads and almost perfect grain alignment between the lid and the jar.

William asked me to make some bowls from a nice sized walnut crotch that he had rescued from his neighbor’s yard. Comments are at the bottom of each photo.

Click on the first photo to start the slide show. 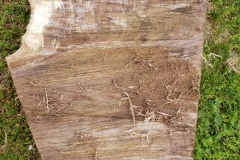 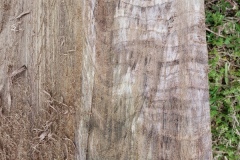 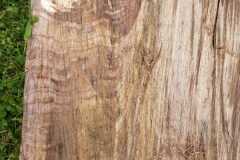 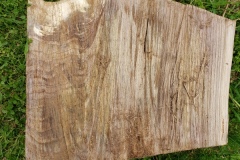 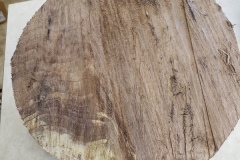 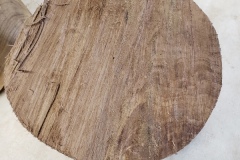 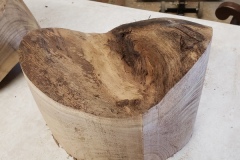 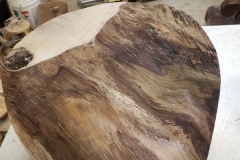 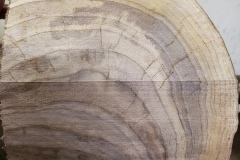 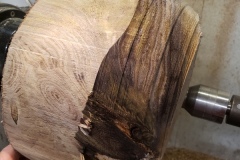 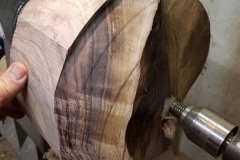 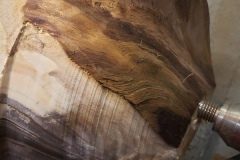 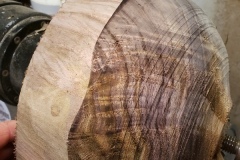 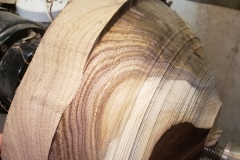 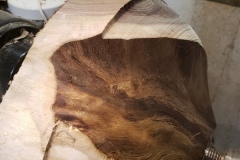 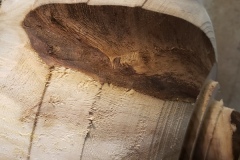 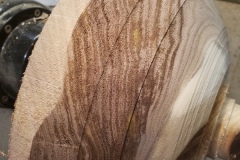 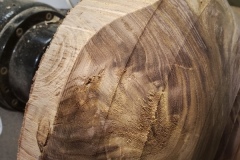 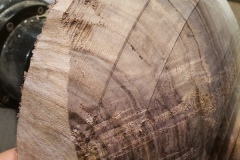 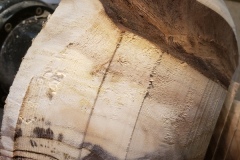 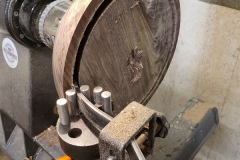 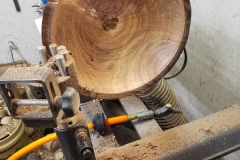 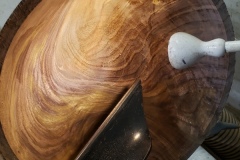 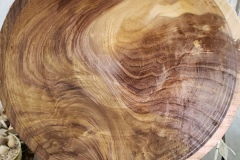 I got a start on a large black walnut bowl this afternoon. A friend of mine was over to borrow my lathe for something else and he helped me get it mounted onto the lathe when he was done but before he left. The first view is from the rear.

This blank after it was prepared measured almost 18 by 20 inches. Obviously a bowl is round so the largest it could be is limited by the smaller dimension. The next view is one “end” of the blank. The wood had sat unsealed for a week since the blank was prepared, so there are small checks in the wood. These will turn out.

This is the other “end” of the blank.

The next pic is after about 4 minutes or so of turning, just trying to get the blank round and in balance.

After another few minutes – the blank is much more balanced, but is not yet round – still oblong.

After some more time, the bowl is now shaped. The bottom needs some work to be able to mount the bowl into a chuck to hollow the bowl.

Here is shown after a little more work. It’s difficult to see, but the right side of the bowl now has the “tenon” shaped up for the chuck to clamp on when I turn it around to hollow out the bowl.

I have the ability to “core” these large bowls. Instead of turning the complete inside of the bowl to shavings, this allows me to cut another bowl blank from inside the large one. I leave the thickness of the large bowl at approximately 10% of its diameter. As it dries down it will warp and go noticeably out-of-round. Hopefully this is thin enough to dry without cracking and thick enough to allow me bring the bowl back to roundness.

The picture below is after coring out the bowl but before I trim up the bowl with the bowl gouge. I was able to get an almost perfect core out of this bowl, which left me a second bowl of about 12 inches diameter and 3-1/2 inches deep inside. Unfortunately, as this walnut ages and dries, the differentiation in the grain will become less noticeable.

Here are the three bowls made from the large bowl blank – a 17-inch bowl, a 12-inch bowl and a 8-inch bowl. The white material is a sealer that slows the drying rate down and that will hopefully prevent the bowls from cracking as they dry.. It is applied liberally to the end grain of the bowl to try to force the moisture to exit through the cross grain which makes the wood dry evenly. Otherwise the moisture leaves the end grain portions of the bowl faster than the cross grain portions of the bowl and causes the bowl to crack.

All that’s left for now is to let them dry for a few months and then turn them to final thickness, I will likely add another coat of sealer in a week or so to add a little extra insurance against cracking as they dry. Oh, and I need to sweep up the shop. Again.

A couple years ago, at one my regularly scheduled medical checkups, my GP told me he had saved some wood for me. It was a Dawn Redwood shrub, which he had planted several years previously, but which had become unattractive.  When he cut it down, he decided the wood was too attractive to send to the landfill, so he saved it for me.  I was quite honored.

This tree has an interesting background. Scientists had seen fossil evidence of it, but thought it was extinct.  Then, in the 20th century, a valley in China was found where the tree was in existence.  Within a decade, it had been exported all over the world as an ornamental. Today, although the tree is in no danger of going extinct, it’s native habitat is considered to be threatened from industrialization and population growth.

The tree loses all it foliage in the fall, however it is coniferous. The foliage turns pink before it falls. The pink color is where the name Dawn Redwood is derived.

I have the opportunity to finish a few pieces from this wood, from a fairly large bowl down to a few pens. Here are some pictures. The first 7 pictures are of the most recent bowl. This bowl was sold at a craft fair in the fall of 2017.

The next few pictures were of the first bowl I made from the Dawn Redwood. This bowl was sold on-line in the fall of 2016.

One of the first things I made from this wood was a small lidded jar. The lid of  the jar is spalted maple and the knob on the lid is black walnut.  I gave this piece to my GP to thank him for the gift of wood.

Once we have a log all cut up we need to rough turn and seal the bowls. We start by cutting them round on the band saw. END_OF_DOCUMENT_TOKEN_TO_BE_REPLACED

I was recently offered some wood from a tree that was freshly cut. There have been a number of questions about what I do when I get the wood home. END_OF_DOCUMENT_TOKEN_TO_BE_REPLACED

We had two demos at our woodturning club this past spring that involved vacuum pumps.  END_OF_DOCUMENT_TOKEN_TO_BE_REPLACED